This is Breve — the newsletter from Jason A. Heppler. If you want more like it in your inbox, consider subscribing.

The Tudor Networks by Ruth Ahnert, Sebastian Ahnert, and Kim Albrecht is beautiful. 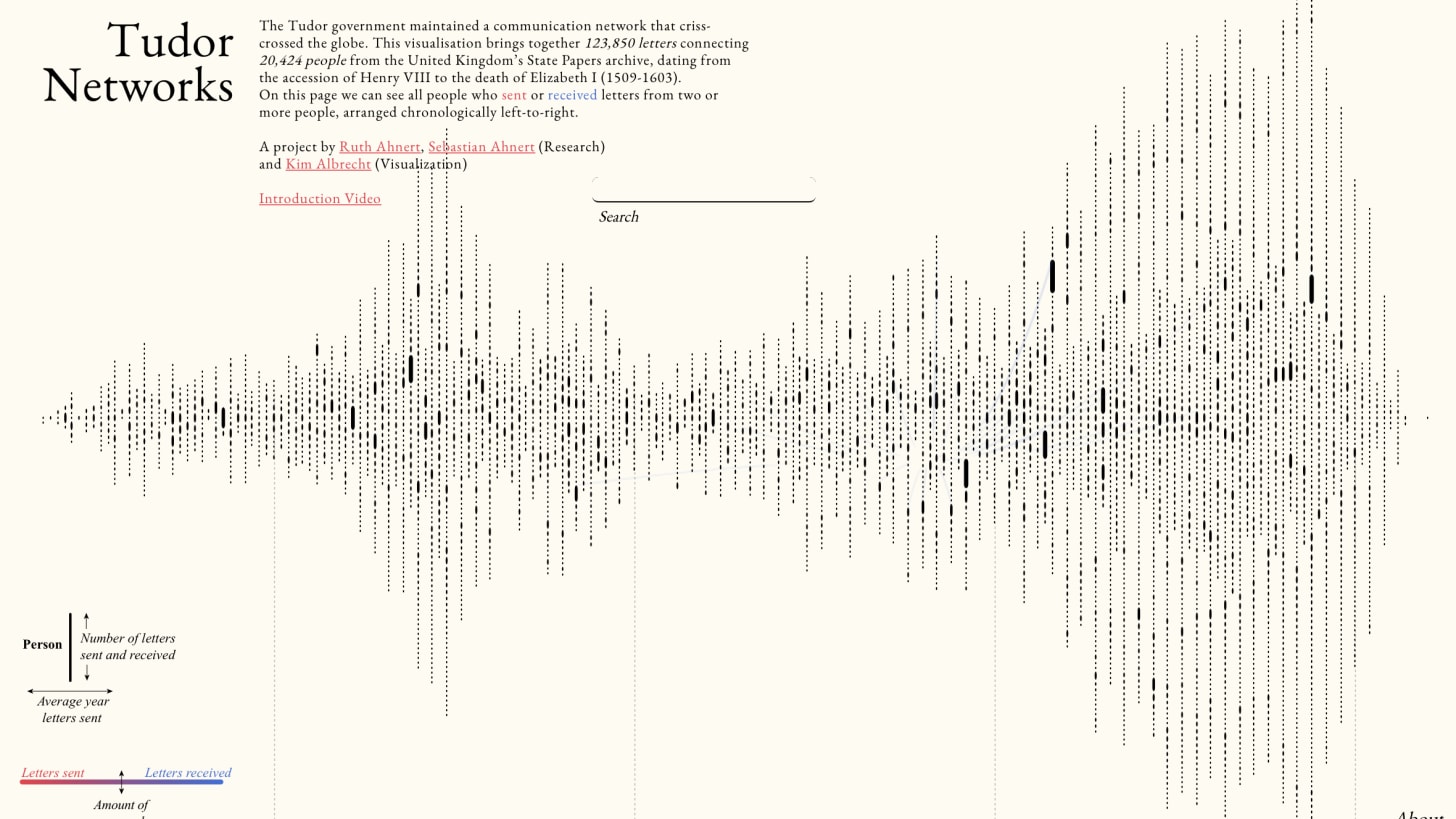 Tudor Networks visualizes over 123,000 letters from the UK State Papers between the accession of Henry VIII and the death of Elizabeth I. In 2008, the Papers were digitized as the State Papers Online that included metadata fields on sender and recipients, location, and description of the letter contents. With XML donated by Gale, Tudor Networks cleaned, deduplicated, and geo-coded the letters to produce their project. It’s an incredible amount of work.

The visualizations and interactive nature of the project work wonderfully. The overview provides readers with a general sense of time and scale — arranging individuals (vertical lines) along an x-axis indicating the average year letters were sent while the y-axis indicates the number of letters sent and received. The result is an effective aggregation of information that otherwise would be difficult to visually discern. This overview graphic alone is arresting — it cleanly indicates periods of intense and growing correspondence. But what makes the project stand out is the network visualizations. 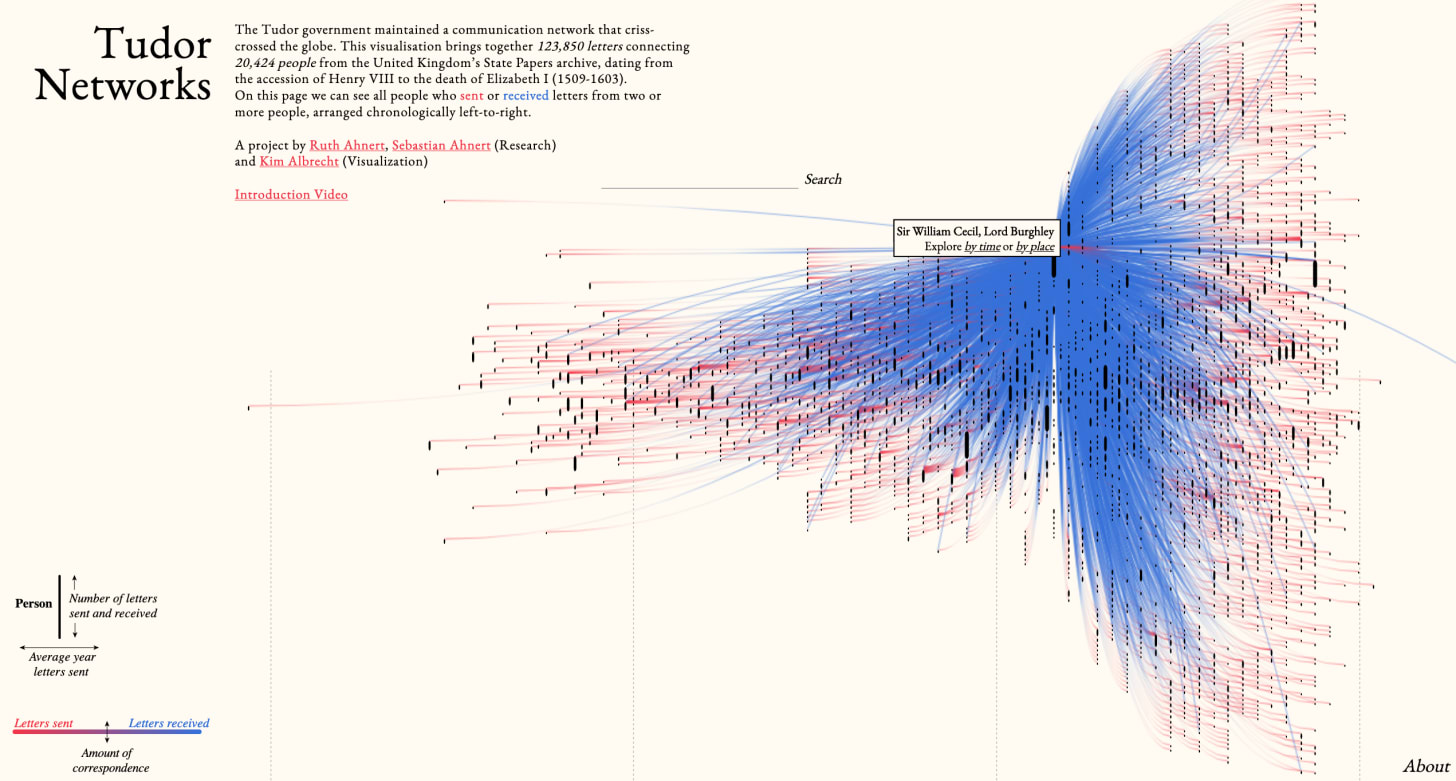 Clicking on any single individual in the overview immediately transforms the timeline into a network of sent and received letters. Visually, it’s a bit busy — but in this case effective in illustrating the scale (or lack) of an individual’s network among the whole corpus. Selecting an individual’s correspondence network also gives users a new set of options: to view their network over time or over space.

Viewing an individual’s network in time reveals a divided visualization of the top fifty correspondents on the righthand side with nodes indicating the number of letters sent and received, and more-or-less a dotplot grouped by month and year to visualize the number of letters sent (red) and received (blue). This network view is likewise deeply interactive: selecting an individual node on the right fades out the rest of the network, allowing you to explore the correspondence of an individual. The individual letters dots also reveal information: hovering over them provides letter metadata, and clicking a dot gives you the text of the letter itself. A rich way to both explore the metadata, but also enter the archive of State Papers in a different way. 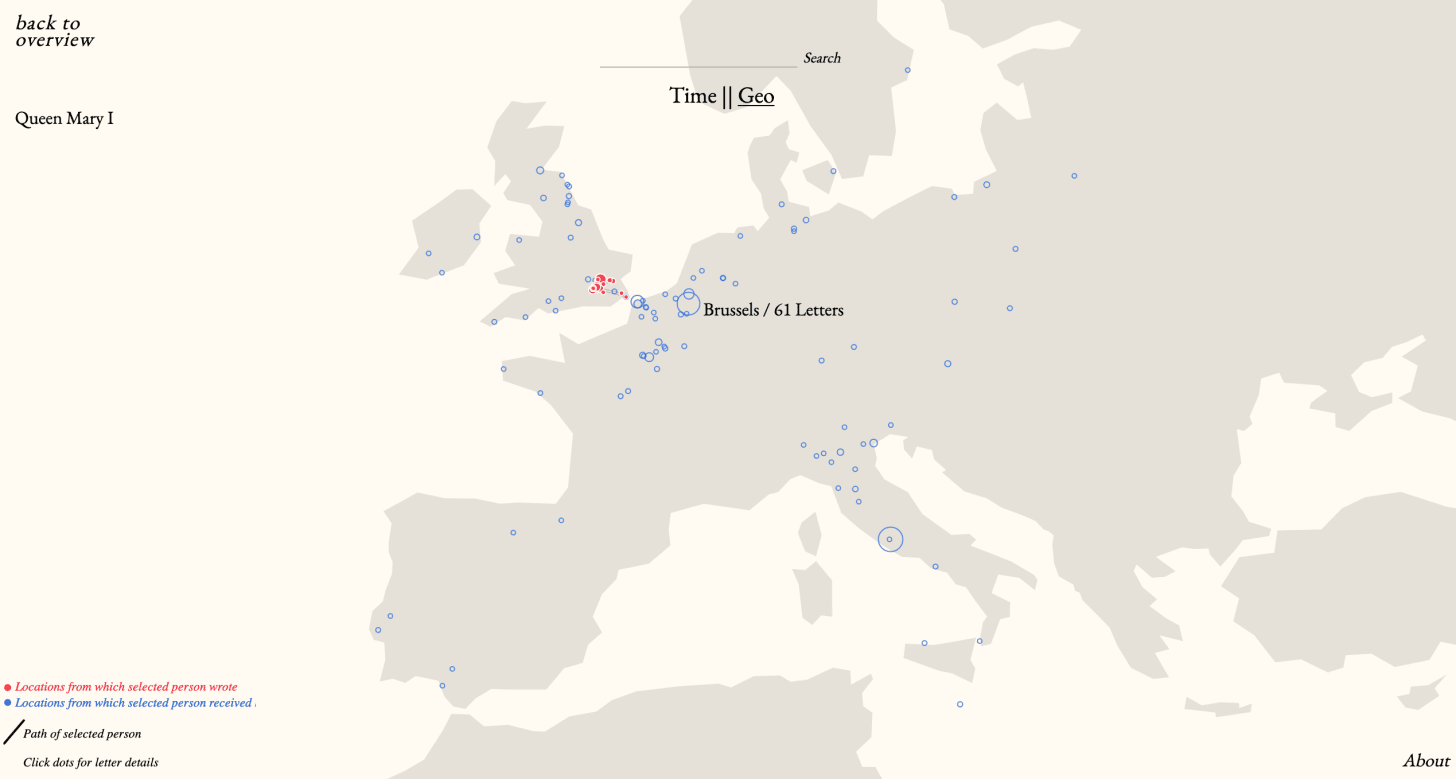 The geographic view provides yet another entry into the letters, illustrating nicely the often vast scale of geography that the correspondence network reached. Points on the map are interactive; selecting one provides you with a list of the letters sent and received at a location along with the ability to then read the letter or view the sender/receiver’s own network. And as before, the individual points on the map are sized according to an amount of letters specific to that location. 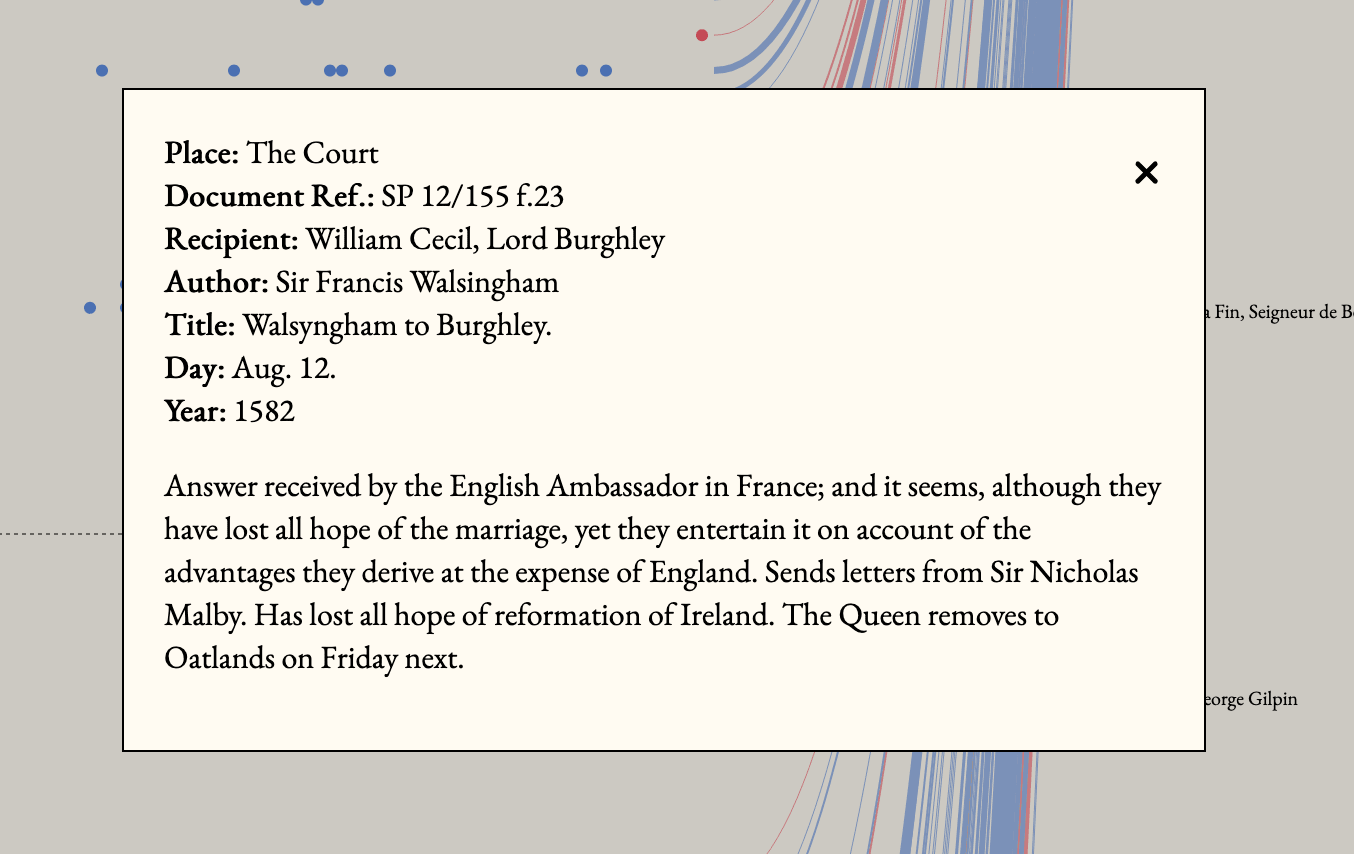 I know very little British history but easily spent a whole chunk of an afternoon exploring their project. Well done.

I’m excited to see the new Open Syllabus galaxy, connecting together 1,138,841 books and how often they’re assigned with one another across the 7,292,573 college syllabi in their database. 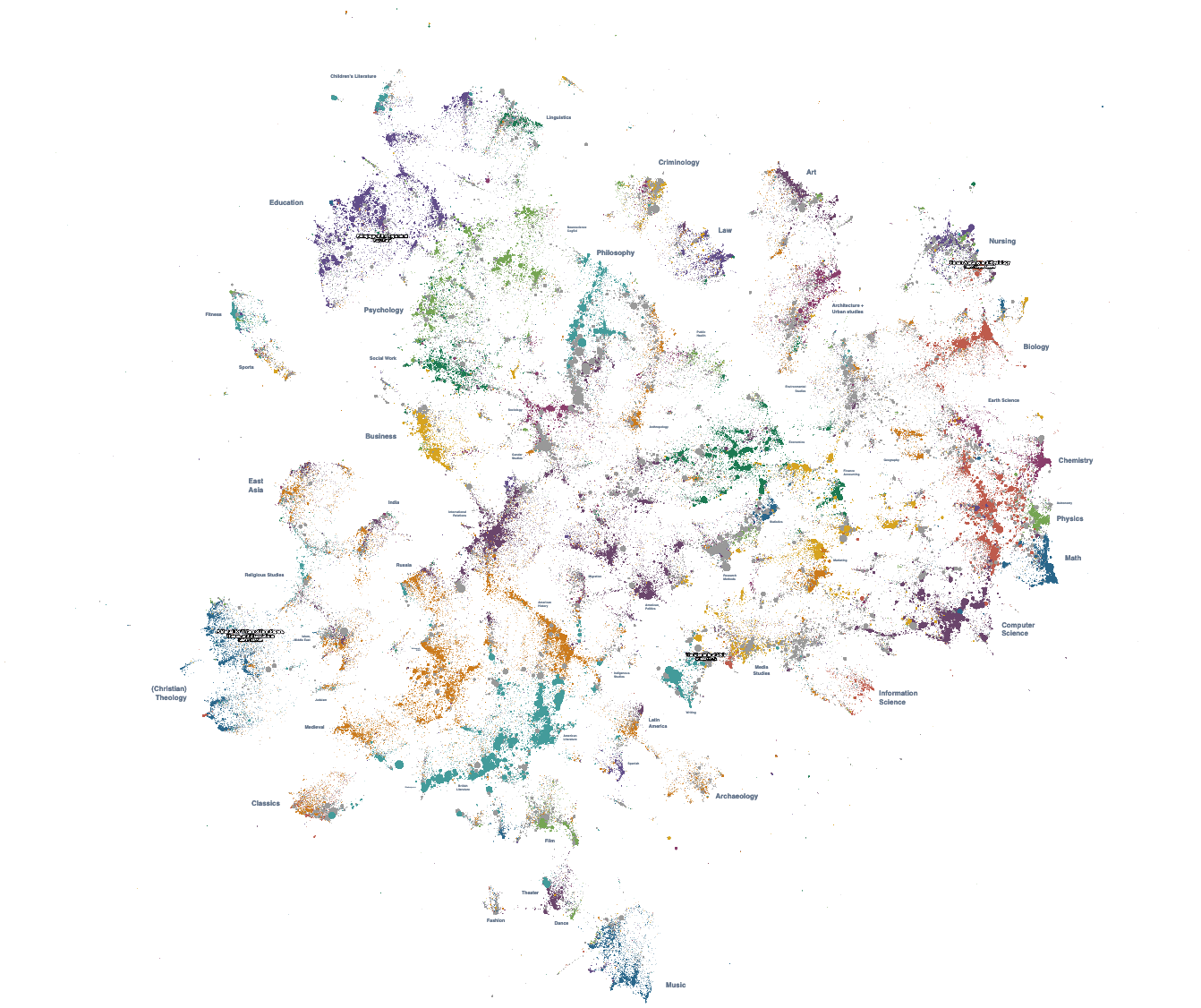 The result of connecting together all of these readings and syllabi is a highly detailed network of topics. Each point, as you’d expect, is interactive — hovering over a point reveals a book and its related topic area, and clicking on a point provides a way to see more information about that work including a profile of the individual title and what’s frequently assigned with it. 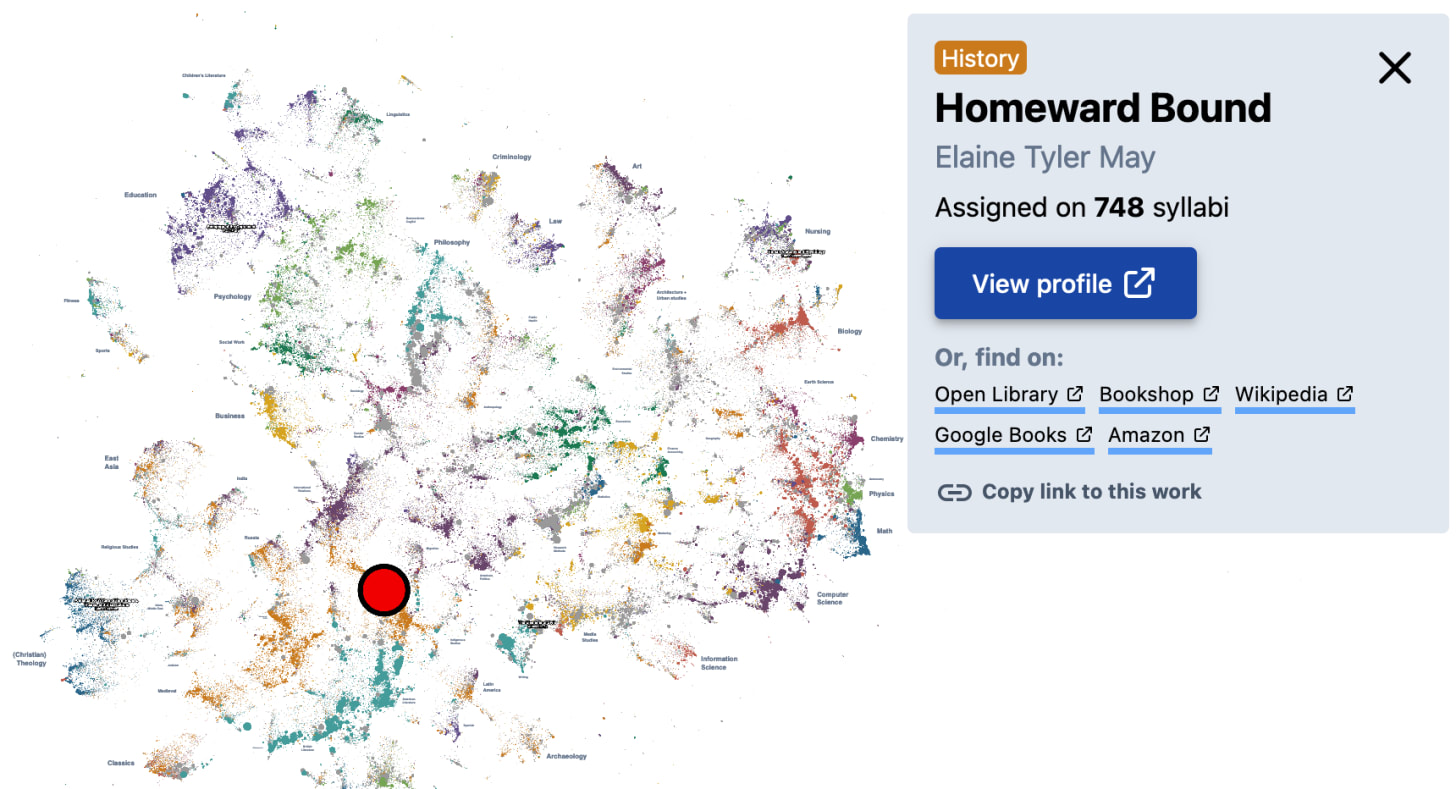 What do we gain by visualizing these together? The primary benefit is a network of knowledge that lets us see connections among different texts — in a historiographical way, how these texts might relate or argue against one another — and may help you in crafting your own syllabus. But also how we come to see key texts as central ways of understanding a topic or theme. It’s probably not very surprising that within Homeward Bound’s top five most co-assigned works is The Feminine Mystique or that there are several books on Cold War culture; but perhaps I’m curious to see Gay New York or The Search for Order included. If nothing else, it prompts me to think more on how these works relate to one another — not only in my own syllabi creation, but broadly considering how it is we as scholars, librarians, and writers generate knowledge.

Which is where the visual might be more revealing than just listing co-assigned works. While that’s still valuable, seeing the book’s place within a broader network of other books feels akin to looking at a library catalog on my laptop versus standing among the stacks: I can find the one book I’m after, but standing at the shelves allows for a serendipitous discovery that has, on more than one occasion, led me to haul armfuls of books to my office rather than just one. 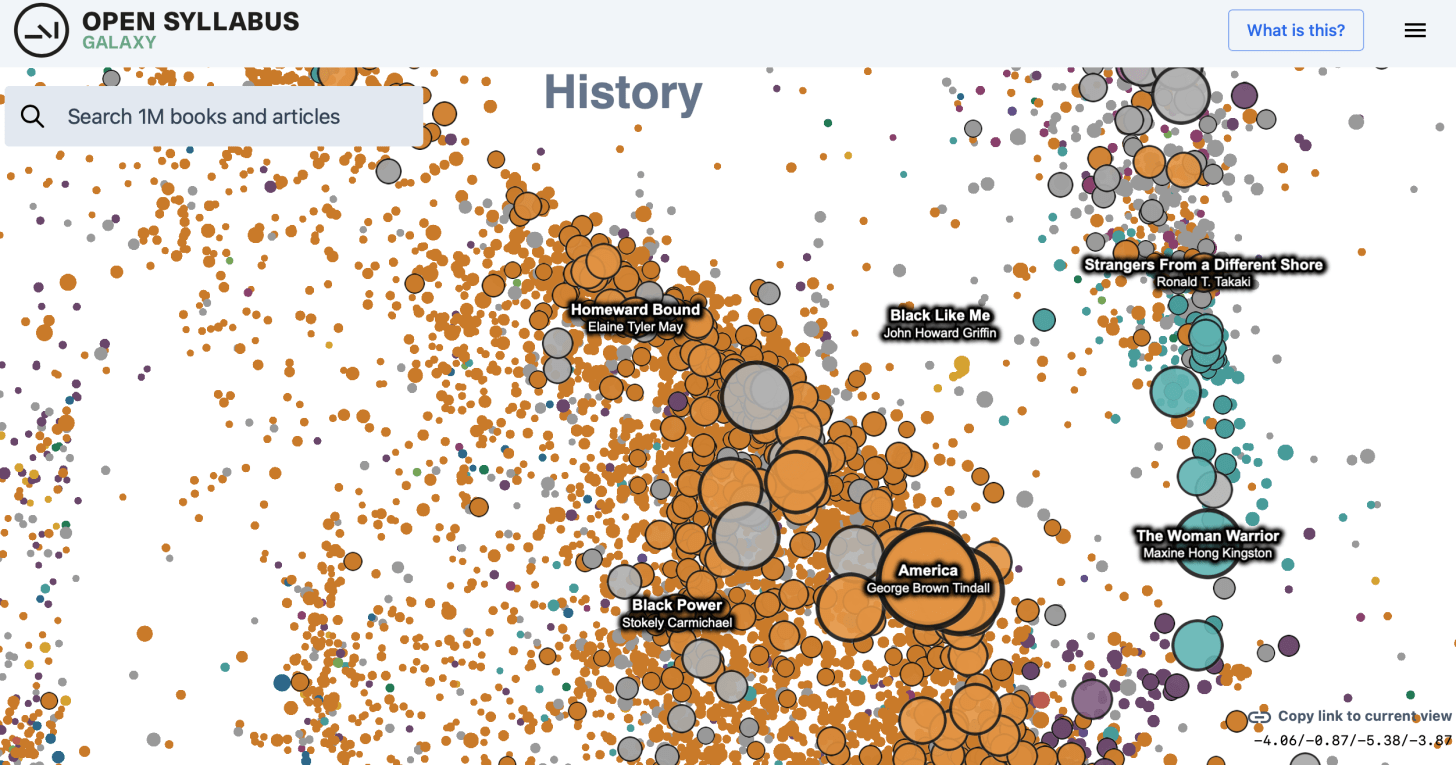 Occasionally here I’ll highlight things I’m working on. Usually it’ll be digital history, but right now most of my focus is on my book — progress on which cratered in the wake of COVID-19 (apologies to my editors at the University of Oklahoma Press).

I’m writing about Silicon Valley’s environmental and urban history between 1940 and 1990 where I examine landscape change and the way people enact and react to such changes. Throughout this work I think we’re reminded again and again that nature is constantly changing and landscapes are created by humans. The landscapes we choose to create and preserve, both real and imagined, reflect values and ideas — in this case, exacting great ecological and social costs even as open spaces, recreational sites, and environmental regulations became typical.

There exists a digital companion to the book project that I hesitate to include here because it needs some serious love, but I’m hoping to dive back into it over the next few months.